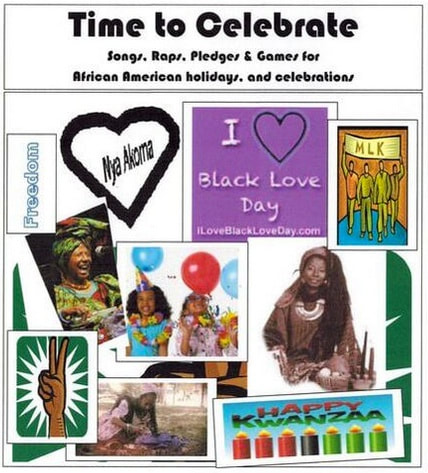 "Time to Celebrate" is an unique CD of songs, raps, pledges and games for African American holidays, celebrations and rituals. They were compiled by Ayo Handy-Kendi, aka Mama Ayo, the Kwanzaa Storyteller, who has delighted young and old with her story performance that told everything about Kwanzaa which included several Kwanzaa song favorites from her community. She realized that many cultural holiday songs have no known authors, therefore have not been published and she began to include them in this CD. Further, as the founder of Black Love Day, Feb. 13th, she personally composed her own songs, pledges and raps for this holiday tradition, as well as an original piece for Martin Luther King's birthday. Negro spirituals and two songs for peace are included as "Freedom songs" - good for MLK Day. There is even a New Afrikan Birthday Song that can be song and worked into a game. Includes a hand-out for sing-along and call and response.

Love Yourself Rap by Ako Handy, aka Waxzimill